Spring Hill Woodworking and The Mercantile 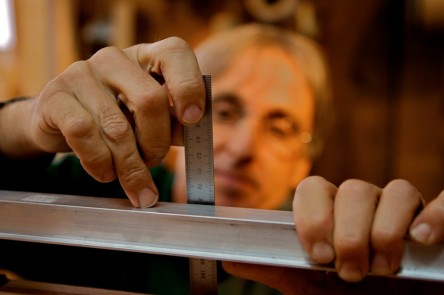 Steve checks the measurement of a current project.

Somewhere off state road 176, amid a community of old homesteads perched on rolling acres and newer homes wedged on smaller plots, stands a curious complex of handmade buildings behind the home of Doug and Bunny Williams.  The speed limit sign posted on their gravel driveway advises visitors that they may not exceed an impossible forty-five miles per hour – for if they did, perhaps they may miss the irony of what lies ahead.  On the right hand, a visitor is greeted by a modern brick home, much of which was designed, amended, and crafted by Doug.  From the rear of the house, an archipelago of wood buildings (also built by Doug) extends around Spring Hill Woodworking and what Doug proudly refers to as “The Mercantile.”

A few of the wood buildings built by Doug Williams.

But what stands today at the complex in Spring Hill, wasn’t always so.  After spending eight years as a Marine during the Vietnam War, Doug was ready to switch gears.  He attended USC in Columbia where he majored in English and minored in Art.  His love of woodworking emerged soon thereafter, taking shape in the garage of his and Bunny’s home in St. Andrews.  He took on small projects building custom furniture such as tables and small cabinets.  As word got around about his skill as a craftsman, Doug took on enough jobs to keep him busy.

Eventually the furniture business segued into other similar crafts, and Doug and Bunny opened an art gallery and frame shop in Irmo.  One day, one of their hip artist customers browsed through wearing a pair of Birkenstock sandals.  Doug tried them out and was hooked.  The shop soon began carrying an entire line of Birkenstocks.  Being the sole outlet in South Carolina (and way before the internet enabled worldwide commerce from the comfort of one’s home), people came from all over the state for the unique cork and leather sandals.  Subsequently, Doug and Bunny opened Footloose on Green Street in Five Points, purveying practical and funky footwear there for fifteen years. 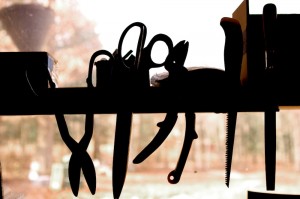 A myriad of tools stand ready for use.

Meanwhile, Doug and Bunny had purchased a homestead in Spring Hill.  The small brick house came with a two-car garage, which Doug used to expand his woodworking operation.  For a time, the family lived in the space above it.  Eventually conditions were right to enable expansion.  Doug used some spare lumber to build a real shop – the first of his outbuildings – just behind the home. 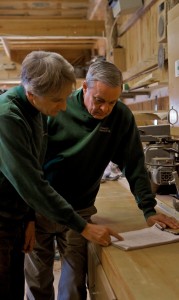 Doug and Steve review plans for a new project.

Hindsight’s 20/20.  Since Doug had more room dedicated to building furniture, cabinetry and other items, he took on more projects.  But it soon became clear that the first building didn’t match his lofty ambitions – he had designed it with too low of a ceiling.  That led him to build the second of his outbuildings with a high-pitched roof and no ceiling inside to constrain the construction of whatever projects he wished.  This shop has since been dubbed the equipment room, and houses, among many hand and power tools, a 10” table saw and a 12” radial arm saw.  The other half of this building is referred to as the “clean room,” where finishing touches are put on pieces just prior to installation at the customer’s site.

Which came first – the planer or the planing room?  While he is no doubt familiar with the process of planing wood, Doug said he prefers to “buy stuff and then learn it.”  Thus, in order to further customize some of the fine wood stock he was getting from places like German-owned Wurth Wood Group, Doug installed an industrial-sized Delta planer in a new building he built beside his shop (now known as the Planing Room).  The new “toy” enables Doug to smooth and re-size entire planks of his favorite raw materials: maple, red oak, cherry, mahogany, and poplar.

Every master needs an apprentice.  Through a mutual acquaintance, Doug was presented with the possibility of hiring fellow-wood worker, Steve Fear.  Initially, Doug didn’t think he needed someone to help him, but the idea grew and Doug began to visualize the future of his business with Steve.  As fate would have it, he couldn’t have asked for a more qualified wood worker dedicated to his craft than Steve.

Steve hails from Bristol, England, and attended Brunel College where he studied the art of woodworking.  He did a requisite apprenticeship and then worked for a few different companies in England and the U.S.  He designed and built all types of wood items from cabinetry to staircases and furniture in contemporary and traditional styles.  Among many clients, he worked on such major projects as Arthur Blank’s offices, Ralph Lauren’s London flagship store, and certain unnamed media moguls’ homes (blueprints were destroyed for security purposes).  Unfortunately, Steve found himself the victim of corporate absorption and liquidation, eventually landing in South Carolina and looking for work in his field.

Steve is now a partner with Doug at Spring Hill Woodworking.  Together, they see the entire process through: from meeting clients and evaluating projects, to design, fabrication, and installation.  They personally ensure that their clientele are satisfied, if not elated, with each project.  Indeed, many clients are repeat customers who have asked Doug to design and build one thing or another for them over the years.  Steve enjoys visiting with clients and studying the exact conditions under which a piece will be used.  Extra detailing such as scribing a cabinet to the plaster wall of an older home (rather than just using trim to hide gaps and imperfections) is second nature for Steve.  He likens the process to the tailoring of a suit – the piece ends up fitting perfectly in place. 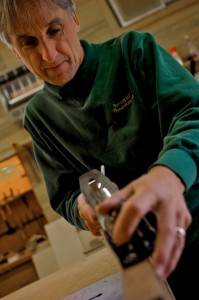 While Doug has spent years crafting wood with his hands, he’s also been busy with another of his passions – music.  Although he sang and played the guitar from an early age, Doug decided to take lessons from one of his friends, Jerry Sims (of Sims Music).  This brought his talent to a new level and he decided that he needed accompaniment.  Naturally, Bunny learned to play the bass guitar.  After playing together for a time, they decided they needed a gig.  So they turned to another of their friends who ran a new restaurant called Harper’s in Five Points.  They learned their chops in part by taking requests on Harper’s patio.  They started with a handful of songs and wound up with over 300 in their repertoire.

As with everything else in their lives, music seemed to spill out into the complex of buildings on their property.  They began hosting afternoon jam sessions (initially to honor fiddler Pappy Sherrill).  Doug would pick and play with various musicians, and everyone would enjoy barbeque and other refreshments.

Year after year, new “islands” appeared in his chain of buildings accommodating the growing crowds and increasingly professional performances.  A multi-bay garage housed restrooms and a sno-cone bar.  A cement-floor pavilion gave guests a nice place to relax and eat. 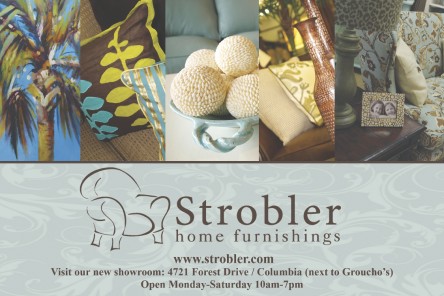 The performances were taking the shape of old-time radio broadcasts similar to those on “The Prairie Home Companion.”  So Doug eventually built “The Mercantile” – modeled after an old country store, and decorated with all manner of tin signage and rusting farm implements.  The wide wrap-around porch is outfitted with colored stage lights and power for PA systems, amplifiers, and keyboards.  Visitors now enjoy full bands, as was recently the case when Dick Goodwin arrived with his musical entourage.

Eventually, Debra Smith, Executive Director of the Newberry Opera House, heard about Doug and Bunny’s “picking sessions,” and showed up to take a look.  This encounter blossomed into the Carolina Jubilee, a staged performance with various artists to subsidize the Opera House’s park concerts series.

One of the custom tables created at Spring Hill Woodworking.

Doug (along with Bunny) can be seen playing his favorite axe, a custom Comins Chester Avenue, at various venues around town, recently at an event at the City Art gallery in the Vista.

Among the “island chain” of home and outbuildings, Doug, Bunny, and Steve have achieved a nearly perfect blend of family life, entrepreneurial woodworking vision, and creative musical expression.  Graciously, they share their passions with everyone they meet.  Whether you like a fine piece of wood furniture (crafted to be an antique for a future generation), or the tonal nuances of a jazz classic, the Midlands is lucky to have a class act like Doug Williams.

Back to top
mobile desktop